LIZZIE GETS HER WATER WINGS (c) By Polly Guerin 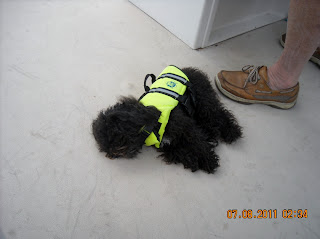 This is a story about Lizzie, a scruff of a little black dog and how she earned her water wings on Blue Mountain Lake.

It was a bright, perfectly sunny afternoon and Captain Bob was preparing his pontoon boat for a sightseeing tour of the lake. Several people had lined up for the trip but before anyone could get on the boat, a scruffy little black dog, flew like the wind onto the boat and jumped right up on Captain Bob’s lab.
“Don’t mind Lizzie, here,” Captain Bob said as he sat at the controls. “She is my first mate and never misses a trip." Captain Bob was a familiar character on Blue Lake and he knew everybody and everything about the rustic community. He was such a natural storyteller and could weave such interesting stories that his tours were very popular.

As for Lizzie, she was a most frolicsome little dog and from the ragged shape she was in one would have assumed that she was a mutt, but underneath it all she was a pure bred poodle of water-bred lineage.
It is no wonder that Lizzie was a natural when it came to water. If she could speak she would have told you, “The best part of any trip I take with Captain Bob is squatting at the very edge of the pontoon and watching the twirling, whirling water trailing the boat as it churned its way across the lake.”
Lizzie was very friendly and thought nothing of dashing about and jumping from one person to another. As if to say, “Welcome Aboard,” she greeted the tourists in this jaunty manner, but not everyone seemed pleased with her antics.
“Get that mop of a dog away from me,” declared a bespeckled spinster lady from New Hampshire who was listed on the boat’s masthead as Miss Mary Jane Winters.
A nasty little boy tried to knock the little dog off the boat but Lizzie was too swift for his foot and off she flew in another direction.
“Whew,” Lizzie thought, “That was a close call.”
Obviously not everyone liked Lizzie’s exuberant personality so when Captain Bob sat at the controls he let the little dog sit on his lap.
“Say, when are we taking off?” demanded a young feisty little boy, named Bud, no more than nine years old, who stood up in the boat and his foot antics set it rocking.
“Sit down,” Captain Bob said, “No one is going anywhere until we go over some safety rules and Lizzie here is going to teach us.”
“Shucks, this isn’t any fun,” the boy blurted out loud.
His mother gave him a stern look, and if I observed right I think I saw her pinch his arm, to shut him up and, boy did his face turn red!
The other tourists did not seem to mind the little sailor dog but suddenly to their horror little Lizzie jumped off the boat close to the dock and sank into the deep, blue waters.
The self-appointed Duchess of Guiche, so named by her companion on the trip, because I was told, she ate quiche every day gasped, “Oh, the poor little dog!”
A little girl named Prunella from South Carolina declared with a drawl as thick as molasses, “Isn’t anyone going to rescue that little dog?”
Captain Bob had jumped into the water and in no time he held little Lizzie up to everyone’s applause.
On deck Lizzie seemed none the worse for her watery escapade. She merely shook her body like the end of a dust mop and globs of water like heavy raindrops fell on anyone nearby.
Lizzie was a self-assured little dog and remembered her ancestral water-bred history, “We have been water dogs ever since and I just love jumping into the lake.”
“Can’t you control that dog?” demanded Mrs. Uptight.
“Right you are,” announced Captain Bob, “That is why everyone must put on a life jacket.”
“I don’t want to,” that boy Bud exclaimed without thinking as his mother gave him another one of her ‘looks.’
Captain Bob ignored Bud and pulled out a small bright yellow life jacket with blue stripes.
“Whose going to wear that small thing?” Bud demanded.
Captain Bob gave the Bud a sharp look, “Everyone is going to wear their life jacket or we do not shove off. It’s a matter of safety.”
“Yeah,” Bud smirked, even that dog?”
“Right you are,” and Captain Bob put the little life jacket on Lizzie, snapped it in place and from a handle on the top of the jacket he held her up for all the tourists to see.
“Why she looks like she’s in a little suitcase,” exclaimed Miss Mary Jane Winters with a note of glee in her voice.
Lizzie squirmed a little bit in her new life jacket thinking, “Doesn’t Captain Bob know that I’m a natural swimmer?”
However, Captain Bob wasn’t taking any chances especially because he wanted the tourists to understand about water safety.
“See, it’s quite simple to put on a jacket. If Lizzie can do it so can you. Now I want everyone, especially the children and that also means you, Bud, to put it on.”
The safety demonstration over Captain Bob held Lizzie aloft in her new life jacket and reminded everyone, “Lizzie has taught us that water safety comes first before we shove off on any water excursion.”
Lizzie barked in agreement and that is how Lizzie got her water wings and became a symbol of safety on Blue Mountain Lake.
-end-
Posted by Polly Guerin at 9:12 AM