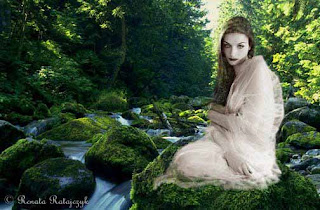 Once upon a time in the land of Mother Earth, Lulu the Weaver was attending her flock of sheep in a lovely green pasture when the village postman walked up the path towards her quaint, rustic cottage.

The postman, a jovial chatterbox, had not
delivered any mail to Lulu the Weaver’s cottage in a few days. It is not wonder, that when she saw the postman approaching, Lulu rushed up to the gate and with eager inquiry she asked the postman, “Anything for me?”

“Well little lady, the postman replied. “I’ve made an extra trip to your cottage today because I have a special delivery envelope for you.”

Lulu the Weaver clasped her hands and beamed the most engaging smile of anticipation. The postman pulled the envelope out of his big satchel. It was addressed in very fancy handwriting, inscribed as it was with artistic calligraphy to.

“Oh, I am so excited,” Miss Lulu exclaimed. Miss Lulu opened the envelope and retrieved a hand-engraved invitation.
“Looks mighty important,” the postman observed as his eyeglasses fell to the tip of his nose.
The invitation read,

“You are cordially invited to attend Mother’s Earth’s

Planet Awards for Conscientious Service to Protecting the Environment.

On Saturday April 27, every year

Lulu the Weaver jumped for joy. “Why me?” she pondered. The postman looked over his eyeglasses and with a broad grin he said, “Well, I guess you will have to attend the event to find out.”

Miss Lulu immediately thought out loud. What will I wear? Let’s see I have five days to spin the wool and weave it into organic fabric and make a new garment that would be appropriate and earth-friendly for the occasion.

“Well, it will be best if you begin right away,” urged the postman, and with that he waved goodbye, “Good Luck, Miss Lulu,” he said and continued on his appointed delivery rounds.

All week Miss Lulu was consumed with spinning and weaving the organic fabric, and dyeing it to perfection with organic dyes from colors that had been extracted from a variety of vegetables, plants and flowers. At the end of the week to her satisfaction Lulu the Weaver realized that she and had finally created one of the most beautiful earth-friendly garments on the whole Planet.

With a confidant smile on the appointed Saturday on Earth Day in April Miss Lulu ventured out to attend Mother Earth’s Planet Awards. When she arrived at the grassy hilltop ceremonial grounds many people had gathered to view and celebrate the occasion.

Lulu was met by one of Mother Earth’s greeters, a charming forest sprite dressed from head to toe in a tunic and tights made of green foliage and one large jaunty leafy cap. The friendly sprite invited Lulu to take her place in the reserved ‘honorees only’ section.

“Welcome, Lulu the Weaver,” the winsome sprite said as she escorted Miss Lulu to her seat and remarked, “You must be proud to be selected to receive a Planet Award.”

“Yes, indeed I am,” Miss Lulu gushed as a slight blush of crimson color rose on her cheeks.

The sprite suggested that Lulu meet the other honorees.

“Hello,” Lulu greeted the other guests. I am Lulu the Weaver,” she proudly announced with a bright smile. All the honorees seemed to be awestruck by Lulu’s unique bouffant silhouette. She was wearing her festive organic party dress that had been dyed in layers of soft earth-tone colors with just a hint of sunlight woven into the fabric. Everyone was amazed to see how youthful and sweet Lulu was and how modest she appeared in her earth-friendly attire.

However, Lulu realized that she was not the only one who had been summoned to receive an award. Several individuals receiving recognition on that Earth day included individuals who had performed good deeds to save the Planet.

There was the Champion of Recycling who was so concerned about saving the Planet that he had made it his business to be sure that all of the neighborhoods in every town, every city and every borough participated in recycling paper and newspapers, plastics, glass and metal, and the real garbage in separate containers.

In an effort to protect the environment the self-appointed Scooper Dooper Police Warden patrolled the city streets to make sure that dog owners picked up after their dogs. He also issued a ‘No Pee’ warning to anyone if they allowed their dog to pee on the city’s trees, which would eventually harm the tree’s health and growth.

The chicken farmer wearing his straw had and overalls had traveled all the way from his Organic farm in Austin, Texas. He had been singled out for recognition because he gave his chickens only organic feed and let them roam freely in a free- range setting so that earth people could be assured of environmentally healthy-to-eat eggs.

Looking very proud was Tilly the Toiler, a woman who had transformed a vacant, derelit lot in her community into a beautiful garden where people could enjoy a little oasis of beauty and calm in the heart of the hectic and noisy city.

Lulu realized that she was among some very accomplished individuals, but she also wondered why she had been chosen as an honoree.

A hush fell over the gathering as the Earth Day festivities began. The dulcet chords of a harp filled the air. It was played by a wood sprite strumming heavenly musical notes that wafted through the air with a pleasant melody that sounded like wind brushing through the trees.

Presently Mother Earth appeared for all to see, standing majestically under a bower of roses cascading over a canopy of ferns. She wore a luscious gown of rich velvet grass decorated with a variety of colorful wild flowers that cascaded down the front in waterfall pattern. Mother Earth adjusted her glasses and began the ceremonies.
“Today we pay homage to all the people who honor the Planet. Everyone of you here today justly deserves special recognition. However, there is one very special person who will receive the Platinum Planet Award.”

Mother Earth was handed an envelope, and just like the Hollywood Oscar Awards she gingerly opened the sealed envelope. Mother Earth peered at the audience over her eyeglasses and with a rosebud smile she announced,

“And…the Platinum Planet Award goes to Lulu the Weaver, who spins the wool from the sheep, weaves the yarn into fabric, and dyes the cloth in natural organic colors and makes garments, hats, scarves and gloves that are eco-friendly to the Planet.”

By the expression on Lulu’s face one could see that she was truly amazed to be singled out for the special award. Lulu was so stunned by the announcement that in the excitement she momentarily seemed stuck in her seat, but one of Mother Earth’s forest sprites realized Lulu’s dilemma and escorted her to the stage of meet Mother Earth and claim her Platinum Planet Award.

Unusual as it was, the award took the shape of a round world globe made from brown earth on which moss green shapes formed the outline of the countries on the Planet. The globe rested on a base of gleaming pure platinum with wires that spelled out the words Platinum Planet Award.

As Lulu stood by Mother Earth the audience rose to their feet and applauded ever so gently like soft mellifluous rain that poured praise on Lulu’s accomplish- ment and at the same time a forest sprite struck up a triumphant pretty tune on the harp .

Mother Earth kissed Lulu on both cheeks and congratulated her once again. With trembling emotion Lulu told everyone, “I am thrilled and surprised to receive this Platinum Planet Award and I am humbled and so very thankful. This is a great honor and it gives me renewed inspiration to create eco-friendly fabrics and garments that protect the earth and the people who wear my creations.

“Thank You, Thank you!” Lulu gushed with appreciation. Then cheers went up again and again until they finally died down and other awardees were called up to receive their Earth Day Awards.

And that, my friends, is the simple tale of how Lulu the Weaver won the recognition she deserved for creating organic fabric garments that contribute to saving our Planet.

Email ThisBlogThis!Share to TwitterShare to FacebookShare to Pinterest
Labels: eco-friendly to save the Planet Earth, Organic fabric